How can we remove barriers to charitable giving? 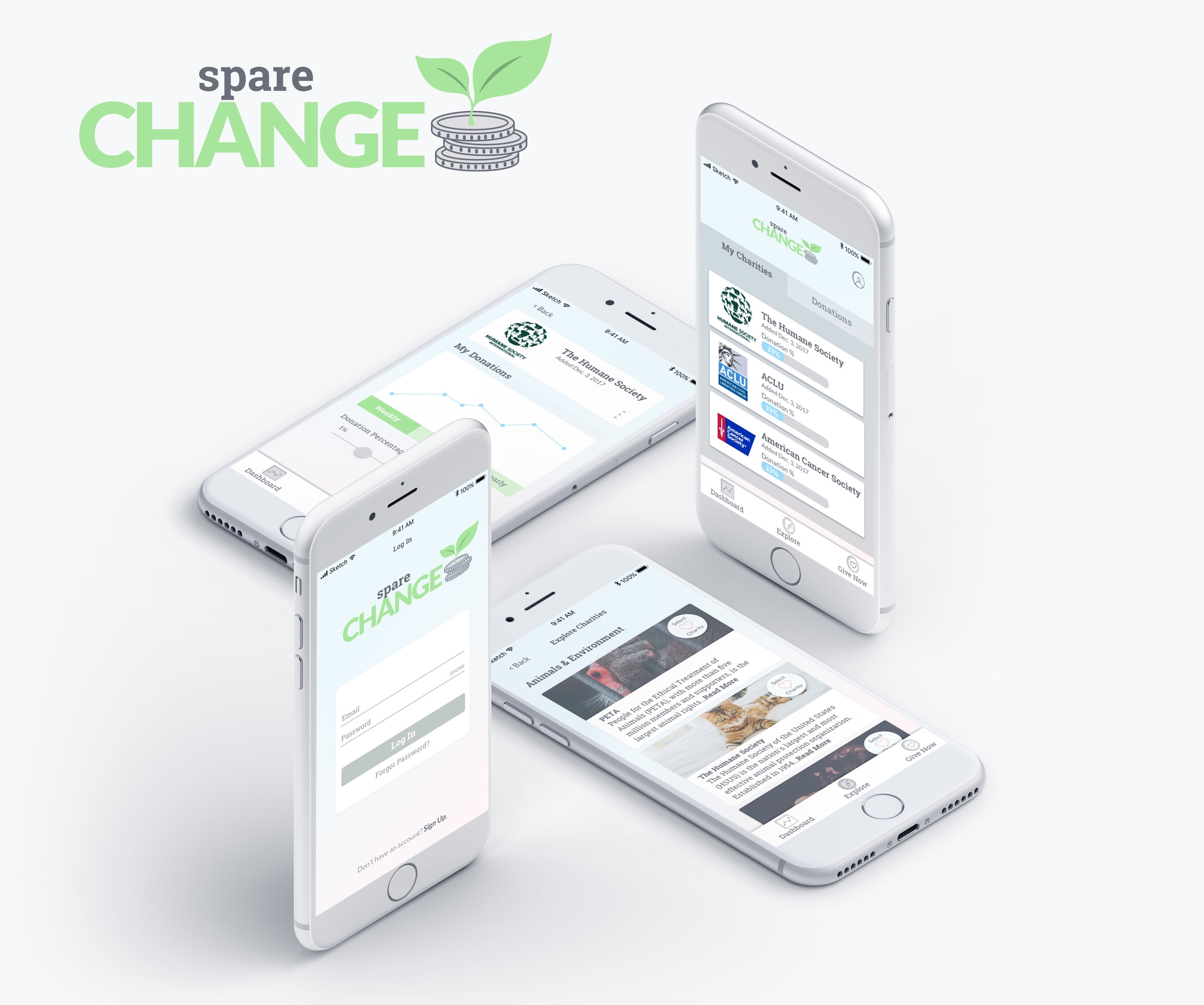 sparechange is an custom mobile app concept focused on helping people increase their charitable giving through microdonations. This project was completed as part of a capstone for DesignLab UX Academy.

According to the Notre Dame Science of Generosity project, two-thirds of Americans believed that generosity was an important personal quality to have. Yet 45% of Americans, including four in ten of those for whom generosity was an important self-identifier, gave no money to charity in the past year. Many seem to think if they had just a little more money, they would be more inclined to give, or, that someone else with more money is more able to give then they. So what if it were more simple to donate even small amounts of money with the purchases we already make? Through research, including surveys and interviews, I gained insights into the challenges faced by those who might donate.

Taking into account the pain points uncovered in research, the goal for this mobile app was to design a donation experience that seamlessly allowed every transaction made in daily life to make a difference for hand-selected charities. By making it easier to donate money and lowering the barriers to trust for charities and security of transactions, spareCHANGE could increase the number of individuals making a difference.

After competitive analysis and other secondary research, I wrote an online survey to better understand how people give to charitable organizations, their feelings on charities, and their social sharing habits around charitable giving. The survey resulted in 45 responses. Using these insights, an interview guide was crafted to gain more qualitative responses from donors for the topics above, as well as to give a more human face to what charity means to participants.

“THAT CHARITY IS NEAR AND DEAR TO MY HEART BECAUSE I WAS ONE OF THOSE KIDS. SO A LOT OF MY CHARITABLE GIVING HAS TO DO WITH THAT, SURROUNDING POVERTY AND HEALTH AND GENERAL BASIC HUMAN RIGHTS.”
‍— INTERVIEW PARTICIPANT

From my secondary research, I discovered that women are more likely to donate than men. As it were, the majority of the responses to my online survey were also women, which would prove handy in forming a persona. With 95% of survey responses pointing to personal resonance—not urgent need—as the most likely reason to move someone to donate, the persona indicated by the research was someone who wants a connection with her charities. Based on my research and interviews, I created a persona for Jessica Montero, a teacher who wants to move beyond social media activism alone. Through an app such as spareCHANGE, donors like Jessica can feel good through their every day purchases, because each purchase is a donation that makes a difference, cents at a time. 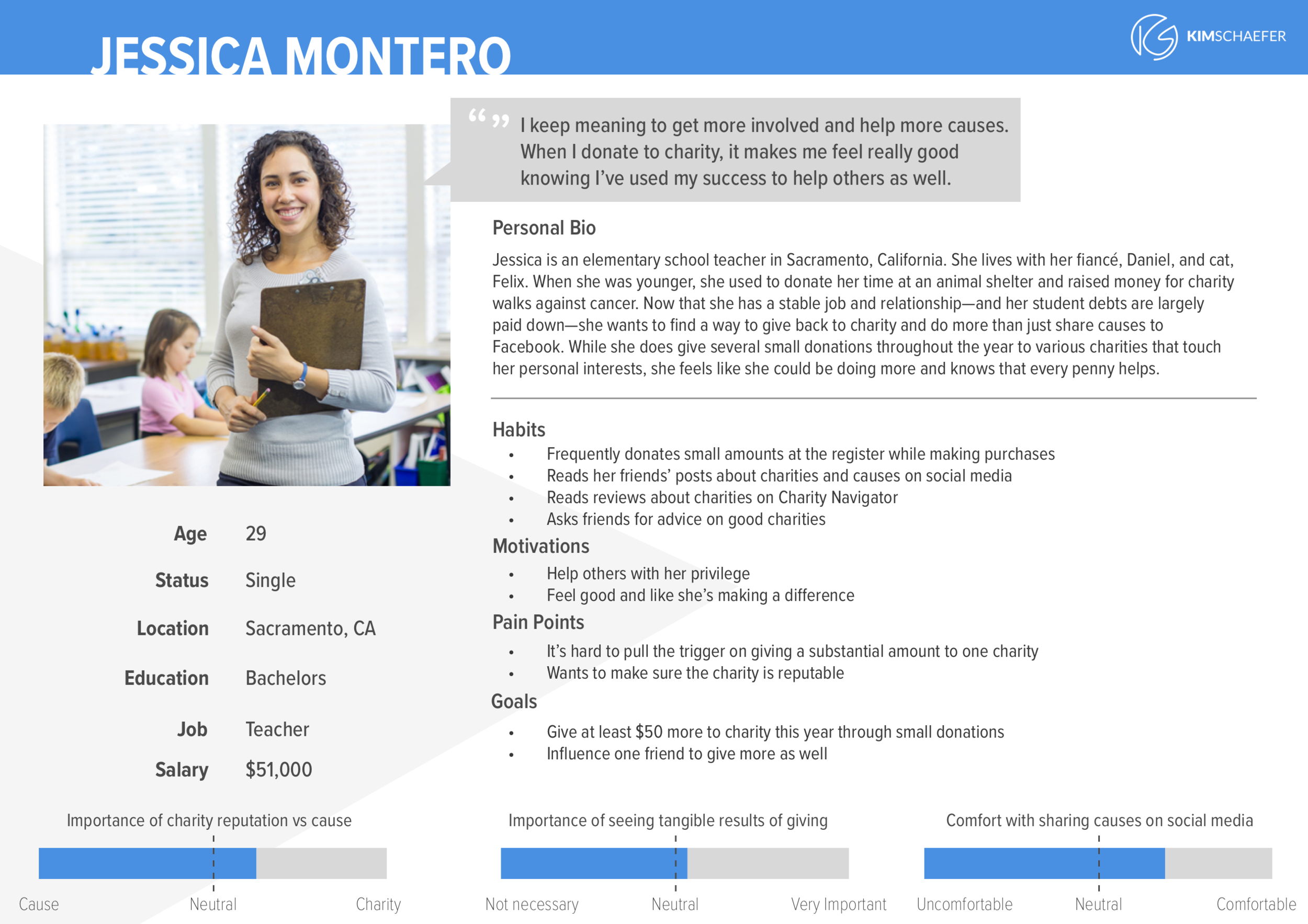 For donors like Jessica, they're looking for an easy way to make a difference, yet they still want to make sure that they have a personal connection to the cause and verify the reputation of the charity.

A low-fidelity wireframe app map for spareCHANGE gave direction to the types of pages and interactions that make up the application.

Based on my research, a low-fidelity wireframe user flow was designed to define the flow and interactions of the application, creating a smooth journey for donors. 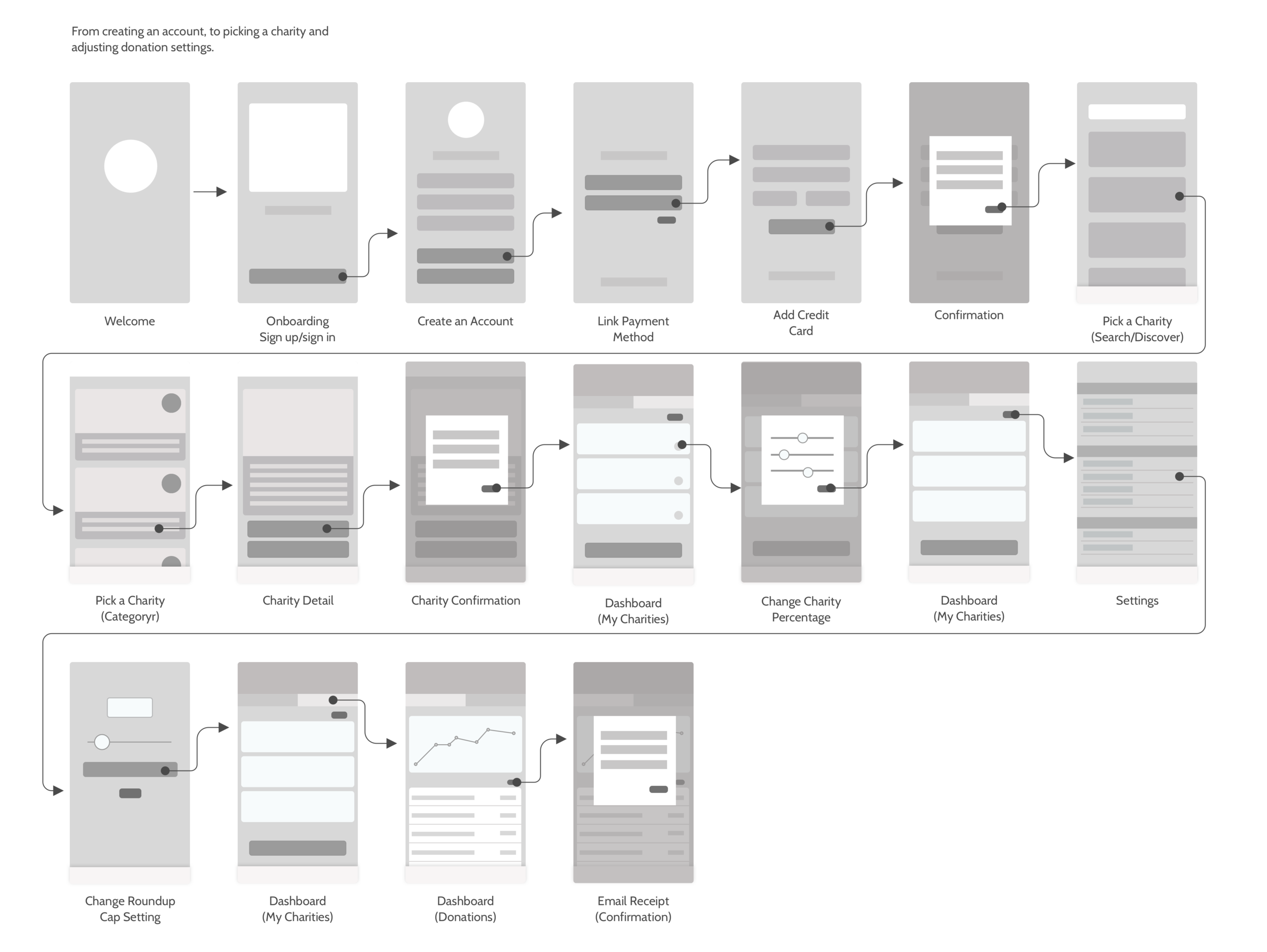 A user flow showing the process of signing up for the app, picking a charity, and changing donation settings etc

Next, medium fidelity wireframes were designed. An easy donation process and picking specific charities are important to Jessica, so design decisions were made to reflect this (such as the inclusion of an on-boarding process). 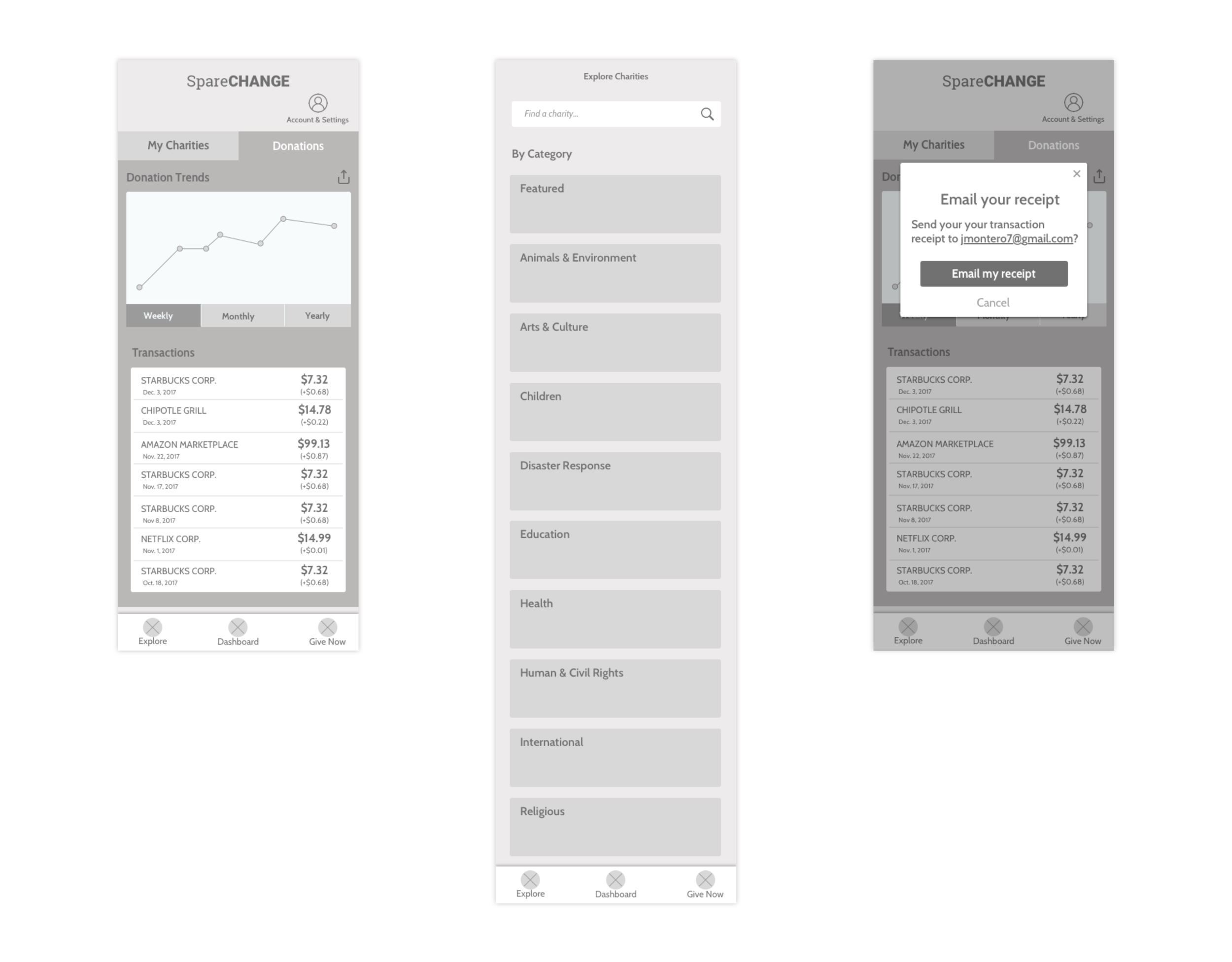 Testing was completed both in person and with lookback.io via live moderation with three participants. Initial confusion in selecting charities stemmed from lack of specific icons in the navigation bar and other clickable elements on screen were seen as possibilities for completing the requested tasks, resulting in errors. The testing process also brought forth the realization that the UX for sending a receipt of donation transactions was incomplete, due to lack of ability to select a date range.From these results, I compiled an affinity map to figure out exactly what improvements needed to be made. 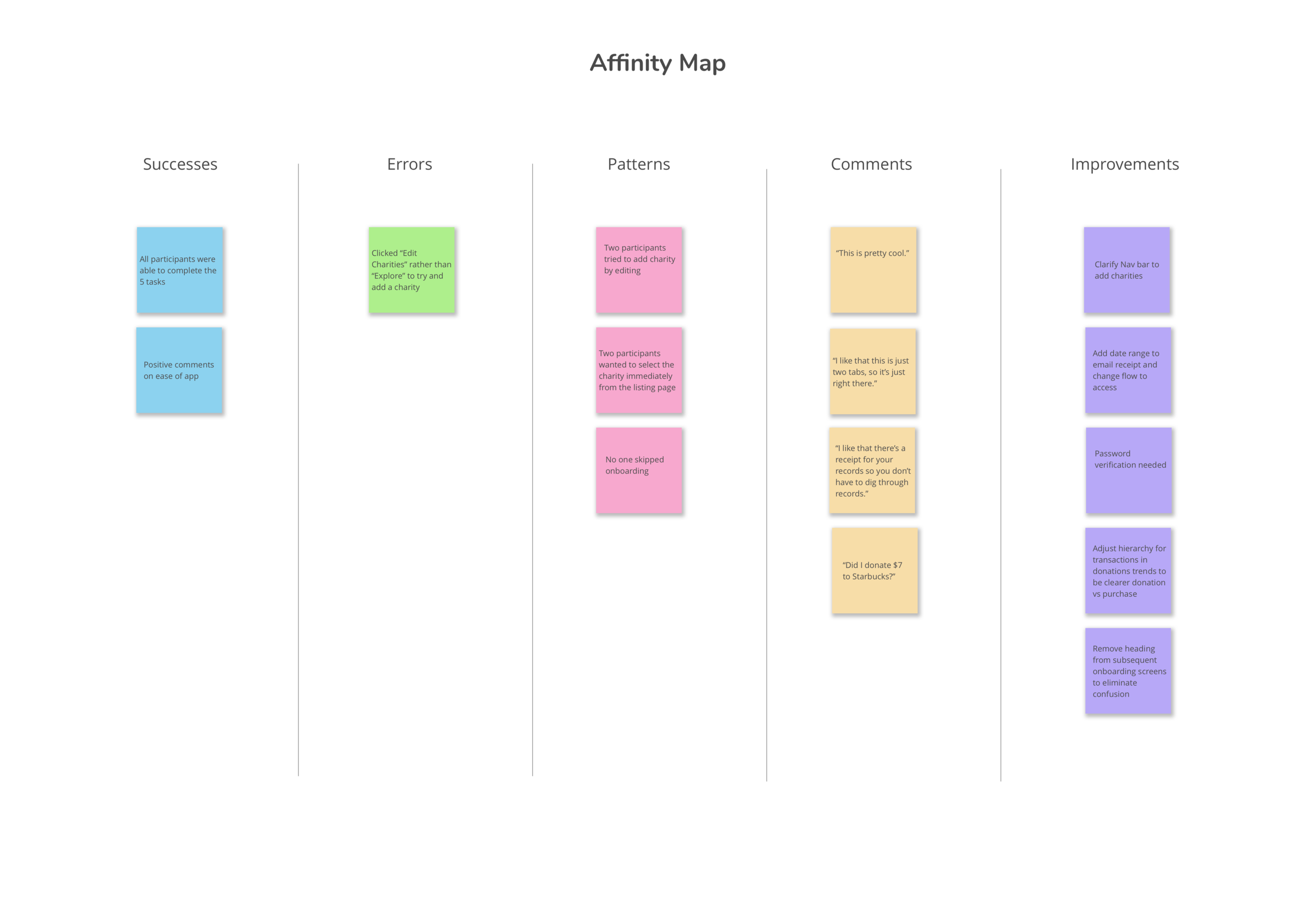 “I LIKE HOW SIMPLE IT IS, BECAUSE REALISTICALLY HOW MUCH TIME ARE YOU GOING TO SPEND ON THIS? THE MAIN CONCERNS ARE GOING TO BE WHERE MY MONEY IS GOING AND WHERE MY MONEY HAS BEEN SPENT.”
‍— USABILITY TEST PARTICIPANT

Changes were made to the initial wireframes based on the affinity map and additional testing was completed with three new participants on the medium-fidelity Marvel prototype. 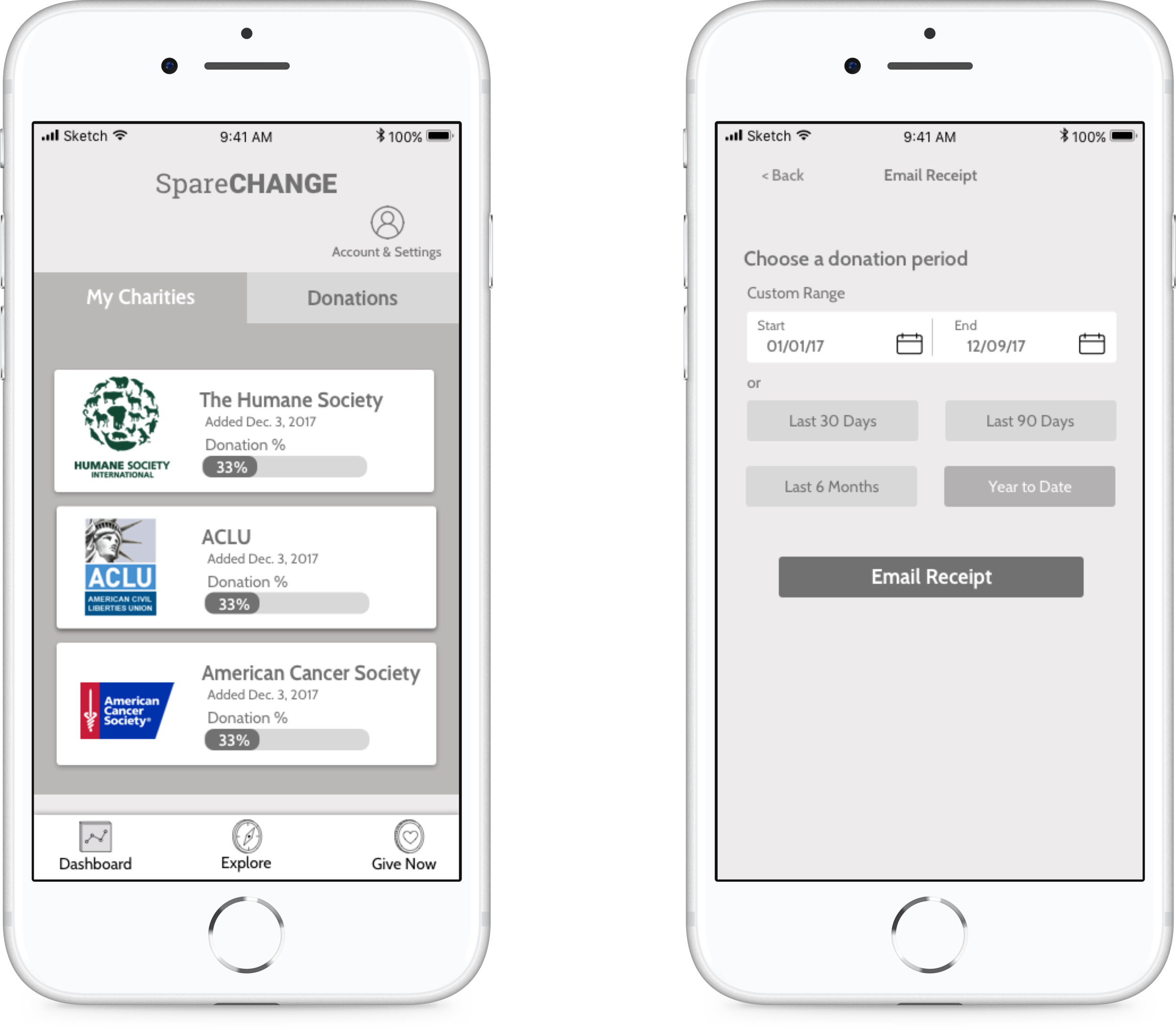 Sample screens from the medium-fidelity prototype

“I LIKE THAT THE NAVIGATION STAYS THE SAME THROUGHOUT. THIS IS REALLY EASY TO USE.”
‍— USABILITY TEST PARTICIPANT

The results of this testing were then used for high-fidelity UI screens.  Check out the prototype:

If there were more time for this project, I would have liked to make some updates to the UI of the app for accessibility (specifically contrast) and do an additional round of testing with the completed high-fidelity screens to ensure there were no further issues in the prototype. I learned about accessibility not long after completing this project, and realize how that could critically impact the ease of use.

Additionally, I would have loved to do more research to really understand  the reasons why people don’t give more (especially for those that have the means and indicate that doing good is important personally). I think doing so would help in marketing the app for wider adoption.

An aspect that this prototype and current set of screens does not address is the integration with social media. Social sharing, especially among millennials can be an effective means of raising awareness for a cause, and primary research indicates that while many survey participants feel mixed about sharing their own charities to social media, over 70% of participants have given to a charity shared by a friend.

This app project was created because I was personally passionate about the idea. If you would like to help me make this app a reality, please contact me!